State of the art timing analysis with industry-harden methods and tools. T1 empowers and enables. T1 is the most frequently deployed timing tool in the automotive industry, being used for many years in hundreds of mass-production projects.

As a worldwide premiere, the ISO 26262 ASIL‑D certified T1-TARGET-SW allows safe instrumentation based timing analysis and timing supervision. In the car. In mass-production.

Click on one of the topics below to discover more details and read in the Success Stories section what our customers have to say about T1.

The target interface can be provided by CAN, FlexRay™, JTAG, or Nexus. Unlike other solutions, T1 requires very little bandwidth for communication. This explains how T1 can be used so successfully in mass-production projects, where bandwidth is typically scarce.

When the data, for example scheduling trace, have been transmitted to the PC, they are visualized and analysed. The generation of reports and the facility to automate all T1 functions enable perfect integration into the testing process.

The target software supports more than just the pure collection of data, however. The target system analyses the data in real-time, for example to detect whether constraints are exceeded. In this case, environment information may be saved, to allow detailed off-line analysis. In this way, even complex causes of run-time errors can be diagnosed.

In Downloads you can find more details, such as product brochures, publications and the timing poster with general information on the subject of timing. 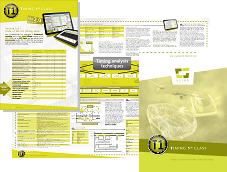